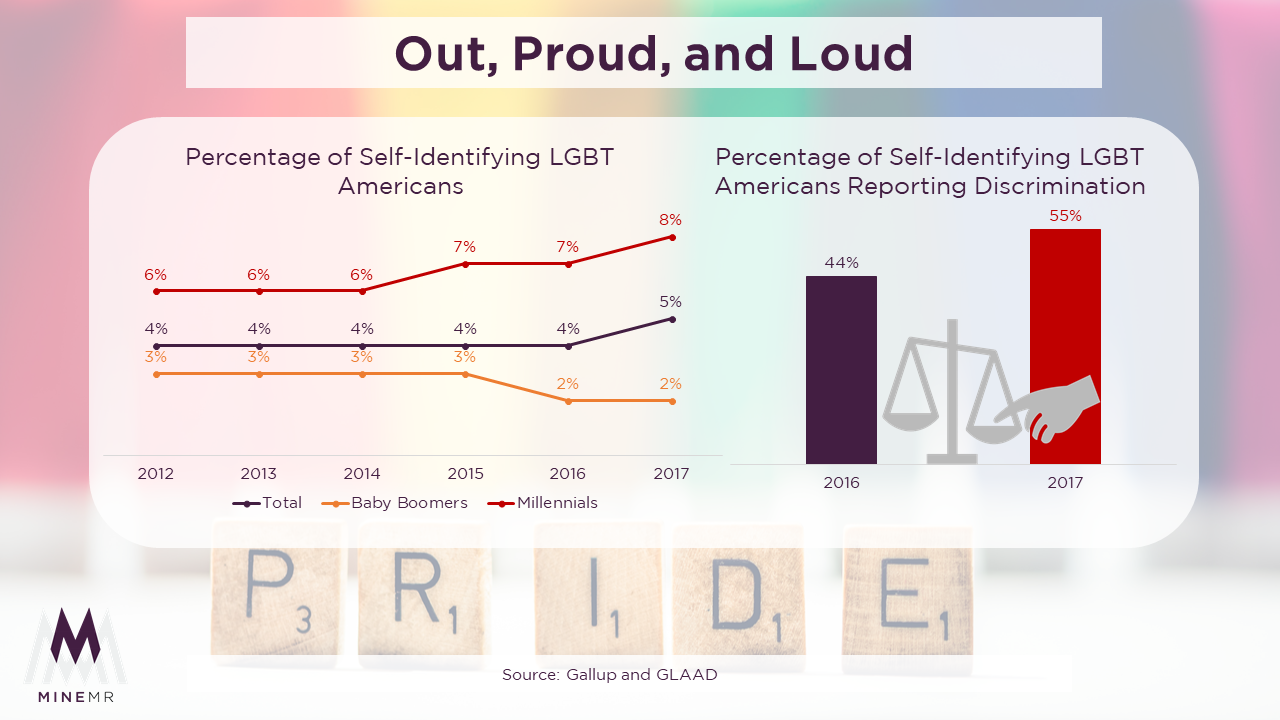 The first Pride Parade took place June 28th, 1970 a  year of the pivotal Stonewall riots. Historians date the Stonewall riots as the origins of the LGBT movement as LGBT individuals fought for their right to exist openly and gain the same rights as heterosexual individuals.  Since Stonewall, LGBT individuals have successfully made tremendous strides to gaining equality in American society from the decriminalization of same-sex to the right to same-sex marriage to the greater visibility of gay and transgender characters in film and media. In a short timespan, LGBT individuals have been able to come out into society and make their voices heard.

Millennials especially have grown up in a society where the LGBT community has gained its most prominent visibility in media and politically. During their childhoods, millennials saw the end of DADT (Don’t ask, don’t tell) and DOMA (Defense of Marriage Act). Moreover, transgender issues have risen to public discourse as the transgender community continues to fight for their rights. Millennials, out of any age group, self-identify as LGBT at the highest rates and are driving up the total LGBT community in America. Baby Boomers, on the other hand, have seen a drop in self-identification. Baby Boomer LGBT individuals have lived the 1980’s AID/HIV crisis and seen their community suffer greatly; moreover, the majority of LGBT Baby Boomers are single rather than coupled. Baby Boomer LGBT individuals do not have the same inter-generational support systems as their millennial peers.

However, despite the great strides the LGBT community has made, LGBT individuals reported more cases of discrimination in 2017 than 2016. This rise in acts of discrimination highlight that progress is not always linear and minority communities and their allies must continue fighting for their rights and acceptance in society.

Related Articles
The Rise and Role of Data
Love and Hip Hop: The Power of Streaming
Politics of Love